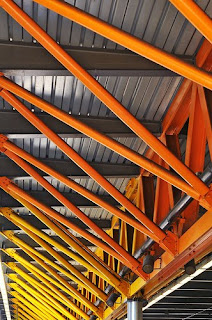 The Three Act Structure
While the Hero’s Journey was a good starting point for me to build my story outline, I discovered after the story was written that the plot lacked that certain spark to really make it flow and stand out. But I couldn’t really figure out what was missing. And then I found the Three Act Structure.  It’s actually taken from the theater, since plays were the dominant form of storytelling for thousands of years. Alexandra Sokoloff has a good description of the structure on her blog.

I found that her way of describing each act, breaking it down and using movies to describe the different aspects, really helped me in understanding that by using this format, you give readers a roadmap – a structure that they understand and can follow. She’s got a great table of contents with all of her lessons in order if you’re interested in learning more.

The Four Act Structure
But then I discovered there was another view on structure – the Four Part Story. I found a great run-down on it at StoryFix, as well as an extremely well done series on the various parts. But in a nutshell Larry Brooks says stories can/should be broken up into four parts:

Within each part there are certain milestones you must hit in order for it to be a successful story. To be honest, there isn’t much difference between the two structures – in the second example, Parts 2 and 3 are simply combined to make up the second act in the 3 Act Structure.

But what I found was that using these formulas, along with making sure I hit the expected high/low points of the structure, allowed me to tell a story that felt cohesive and suspenseful. Basically, I’ve used these as a series of questions I know I need to answer before the story is over. I simply plug everything into a spreadsheet and see where I’m missing pieces or need to flesh out the story more.

Next time: I’ll wrap up my impressions of how my new plotting tools have worked for me.