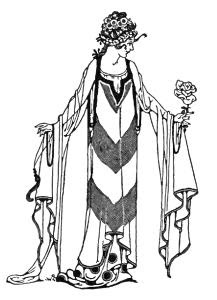 Last weekend, I finally started the revisions of my adult urban fantasy. I’ve spent mumblemumblemumble odd weeks getting ready for this. And now I’m finally ready to dive in. To be honest, it’s not going to look much like my first draft when I’m done. And that’s a good thing.

I know most people say their revised draft is significantly different than their first. But I had to completely replace my female main character! The plot was fine, for the most part, the romantic lead was pretty good. Even the villain will be ok with just a few tweaks. But I HATED my female MC. She was boring, flat, lifeless, annoying, and occasionally too stupid to live. But I didn’t know what to do about her. Finally, with my revision course fresh in my mind, and some of Holly Lisle’s good advice, I realized I needed to kill her and replace her with someone else.

And I have to admit. The murder felt pretty good!

Because as soon as I did that, everything clicked into place. I could get inside this new person’s head, I could feel her pain and joy as I was writing. It’s going to require a ton of work now, but I can already tell the story is better for it. Funny thing is, I couldn’t just change the original MC’s personality in the story. I had to physically remove and completely replace her – name, physical description, personality etc.

And while I was poking around for some personality info to get my ideas, I stumbled upon this site – TestDex. It’s full of personality tests you can take including Myers Briggs, Maslow’s Inventory, and a ton I’d never heard of. I ended up spending hours on here taking my own personality tests! But, I’m a sucker for that kind of stuff, I find it fascinating to see how every one’s personalities fit together. In fact that’s kind of the theme of the novel I’m working on.

So have any of you ever had a problem character? Someone you couldn’t stand or couldn’t make do what you wanted? And if so, what did you do about it? Have you ever had to kill off a character and start again?