What Do You Do With A Problem Like Borders? 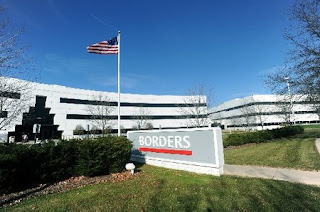 Every day when I turn into my work parking lot, I drive past the Borders World Headquarters. It’s a huge building – I can’t even imagine how many people it holds, but at one time, I know they have several thousand people working there. As of this year, they’re down to 600. Their parking lot is half full, a ghost crew almost. None of the hustle and bustle I remember from interviewing there years ago when people were jammed in 3 to an office.

For the tortured Michigan economy, Borders was a success story, a beacon of intellect amidst the auto companies and manufacturing plants. Borders was my local bookstore before it went national. It was where we went to hang out in high school when there was nothing else to do. The flagship store in down town Ann Arbor was two stories of magic – book readings, concerts, lectures, art exhibits. For this suburban girl, when I browsed the shelves there I felt cool, smart, urban.

I noticed the sign several weeks ago, but I didn’t pay it much attention. I just assumed they were trying to lease out some of the extra space they no longer needed. But today it’s official: the Borders World HQ is for sale.

That alone doesn’t mean much – real estate gets bought and sold all the time. But what worries me are the implications. They’re already closing stores and canceling leases across the country. What better way to cut some more overhead than by relocating to a smaller and cheaper space for their HQ? Michigan has a dearth of cheap property right now, I’m pretty sure they could get a great deal somewhere near by. And while they’re at it, maybe cut some more employees.

At one time, Borders was one of the Big 3 employers here in Ann Arbor, and a mover and shaker in the publishing/book world. Now it’s drowning in debt, low morale, and struggling to stay alive. Even more worrisome is what it means for authors and publishing people – one less venue in which to sell hard copy books. Is this another nail in the traditional publishing coffin?

Either way, it’s sad to see such a company go out not with a bang, but a whimper.