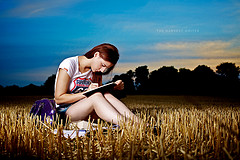 I was running through my blog reader the other week and spotted a post on Krista’s blog where she was talking about her goals for 2011 and it got me thinking – after looking back at what I did in 2010, what are my own writing goals for the coming year? I usually have a vague idea of the projects I want to work on and what I want to accomplish, but this year I thought I’d take a page from her book (HA! Bad pun…sorry!) and write out what exactly my goals are. And then, I’ll have you guys to hold me accountable 🙂

1. Finish revisions on my WIP – Contemporary YA Fantasy set in Japan. My goal is to have this done by March 1, 2011

2. Query the YA to agents starting in March or April

3. Market my short story being released in May MARCH!!!!

4. Re-work an adult sci-fi story that wasn’t working for me into a YA sci-fi novel. This will probably involve a total re-write, but I do have the bones laid out and may be able to salvage a few things.

I think that’s it for 2011. I could potentially write some short stories in there some place, but I’m not great at them, and I’d rather focus on my longer works. It doesn’t seem like a ton of stuff to do, now that I’m looking at it, but  I don’t always work as fast as I’d like, so I guess they’re manageable goals. I know the total rewrite/edit is going to take at least 6 months, so I suppose I have my marching papers for the last half of the year. Though I do have a few other stories lined up, in case I change my mind…my steampunk zombie YA does seem to be calling my name lately 🙂

How about you guys? Do you write out your goals for the coming year? What do you have on your plates? What are you excited about?