I live in a small, Midwestern town of about 2,000 people. And when I say that, I fully expect the typical small town stereotypes to pop into your head. You would be absolutely right. *grin*

We have a 4 block down town area, limited restaurants, and all the small town personalities you’d expect. Even better, we live next door to one. He’s easily recognizable – the Nosy Old Neighbor. 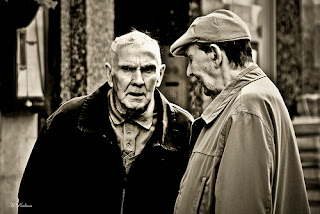 His house is adjacent to ours by only a few feet, and he never lets us forget it. While a very nice man, he has to be the nosiest person I’ve ever met! We can’t step out our back door without him hanging over the back fence to tell us about the latest gossip. And our poor dog has gained 10 lbs from the treats he’s constantly feeding him.

Frank, (all names have been changed to protect the not-so-innocent) spends most of his day shuffling around his yard, peering in windows, and generally butting his nose into other people’s business. He’s thin as a rail, and wears a surgical mask to mow his lawn. When my flower beds start to die from neglect, he hangs over the fence and waters my poor scraggly plants, trying to shame me into taking better care of them.

Frank volunteers at the senior center, though I’m sure there are people there younger than him. He has his coffee crew at the local donut shop, and somehow knows things that I doubt the mayor knows! Case in point is this conversation Frank had with my other half several weeks ago:

Frank: So, did you hear about the rental on the corner? The one that’s been vacant for six months?

Other Half: Um, no, I haven’t heard anything.

Frank (with a gleam in his eye) settles in to tell the story: Well, about fall of last year, remember when those kids lived there? (They were college students) They were up to something! Quiet as mice, you’ll recall, but all sorts of odd comings and goings in the middle of the night.

OH: I remember the kids, but I’ll have to take your word on the other stuff. (Cause we were actually sleeping at night like *regular* people)

Frank (rubs his hands together for the big reveal): Well….When they got kicked out for not paying rent, guess what they found in the basement!?!? A METH lab! I knew it! That’s why there were police around for weeks – they were wrapping up their investigation and trying to dispose of toxic chemicals! *his face practically lights up with glee*

Now, this may all be completely true, but since OH and I are at work during the day, and getting our beauty sleep at night, we were pretty much oblivious to all of this. Frank, however, has obviously been keeping track. He also knows how much the house down the street sold for, the potential condo plans for the vacant lot across the street, even who got pregnant or married in the neighborhood. It’s exhausting to talk to him!

Even worse, he was best friends with the young couple we bought our house from, and you can always tell he expects some day to crack our reserve and learn all our inner secrets. Or play Euchre every Friday night with us. *Shudder*

Frank is the absolute stereotype of the nosy old man – and if I ever need to write one into a story, I have the perfect mold. But, there’s something about Frank that makes you wonder – how did he get that way? What was his life like before he became this “person?” And I hope if I ever have to write a character like Frank, I remember that as well.

Do you have anyone in your life that could step from the pages of a book?