New Season of Dr. Who 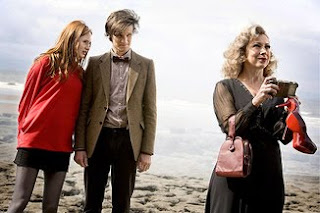 So I have to admit that I started this season’s Dr. Who with trepidation. Matt Smith as the new Doctor? He was no David Tennant, that’s for sure. And while I loved some of Steven Moffat’s work (Jekyll anyone?) I wasn’t sure how he’d fit into Russel T. Davies’ shoes.

And after the first couple of episodes, I still wasn’t convinced. I was devastated to see Christopher Eccleston leave as the 9th Doctor, but I almost immediately connected with the 10th. That hasn’t happened yet for me with Matt Smith. But it’s not the quality of his acting, I’m coming to think that it’s the quality of the scripts. Because Saturday’s episode (in the US) – The Time of Angels, finally let me start connecting with him as the Doctor. And I think it finally started to showcase some of Moffat’s strengths.
You see, I have a problem with dreams. If something is good enough, touches me enough, freaks me out enough, I’ll dream about it. Happens with video games, books, movies, etc. Well, I had nightmares after watching that episode! Full on, can’t go back to sleep for an hour nightmares.
And to me that’s a winner! The story, writing and characters all touched me on a subconscious level and wouldn’t let go, even when I didn’t think it had affected me much at all. And Matt Smith really seemed to finally hit his stride with this one. I loved the part where he bit Amy’s hand. It just seemed like something he’d do!
But that got me thinking. Even if everything else is there – good characters, interesting story lines – and something doesn’t click in the writing, it just doesn’t work. It’s that almost but not quite situation. And I think that’s true with a lot of writers and our stories. We have good ideas, we have interesting characters and story, but until we can pull it together and create that spark, it just doesn’t quite work.
And I think that’s why some people get published and others don’t (me included). The technical skill is there, the story looks good on paper and reads well, but there’s that something special missing. I’ve heard agents say it before, but until now, I didn’t understand it. It’s the difference between good and great. And I have to be honest, none of my novels have hit that mark yet.
I don’t know if it’s something that you can work at and practice, or if it’s inherent in the idea or the writer, but now that I realize that, I’ll be looking for that spark in my own work and trying to figure out how to create it. How about you guys? Do you think it’s something you can learn or is it like winning the lottery – all the planets have to be in alignment for it to happen?