I Need a Hero

I was lucky enough to stay home for Thanksgiving weekend and I ended up camped on my couch with the laptop and the TV. One of the channels had an all day Star Wars marathon and though I’ve seen them a million times, I found myself totally sucked in. AGAIN. You want to know why?

Han Solo. (As played by the deliciously young Harrison Ford) 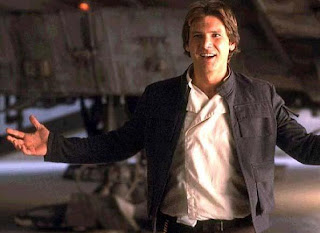 I know Luke Skywalker is the main character, the one who the story revolves around and he’s the one we’re supposed to root for, but give me Han any day. I always want to hurry through the rest of the movie until I get to the Han bits. I even found myself melting (again) at his scenes with Leia, totally unable to concentrate on anything other than his wicked grin and his sexual innuendos. Without doing much more than glaring or leaning against a wall, he exudes sexuality, confidence, roguishness. The scene where he’s trapped Leia in the snowy tunnel and is saying good bye, leaning further and further in to kiss her….until he’s interrupted by another soldier? Mmmmm.

And even better – when they fight and she storms off, Han yells after her… “You need to loosen up! When’s the last time you had a good….kiss?” Ha! Out of all the characters in the series, he’s the only one who can get away with a comment like that.

Watching him again, I realized – I want my characters to do that! But how do I get them to channel their inner Han Solo??? How do I create someone who’s so obviously wicked and daring without really showing much of that? We don’t really get to see *much* of Han’s life before this – of course there’s the infamous bar scene and the hints that he’s trouble, that he just doesn’t care about anyone but himself, but you never really *see* him do any of those things. And yet you still know he’s oh-so-bad.

Off the top of my head, I can think of an author who does that really well in her books – Ilona Andrews. Curran from the Kate Daniel

s series, and Declan from On the Edge

both have that wicked, bad boy persona, but are totally crushable. They’re strong, alpha male heroes, but they still have that wicked side that comes through and softens them just enough.

Unfortunately, writing a character like that is WAY harder than it looks. How do you make someone dangerous without being a jerk? Sexy without being a gigolo? Wicked with a heart of gold? My poor crit partner took one look at my male MC and asked if he was schizophrenic. Sigh. So it’s back to the drawing board for poor Tam.

So – I ask with every intention of using your answers in my own WIP *grin*…who are your favorite bad-boy heroes and how do you channel them into your own books?  What makes a Hero work for you?