Can Technology Rot Your Brain? 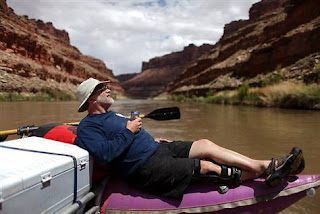 I read an interesting article the other day – Scientists go hiking to probe effects of technology on brain.

The basic premise is that our brains are overloaded with all of the technology stimuli that constantly bombards us. They took a group of scientists, some who were fiercely protective of their devices, some not so much, and they camped for 5 days in the middle of nowhere. No cellphone service, no laptops, no computer games. Nothing but these men, nature, and perhaps a book if they brought one (the article doesn’t actually say).

One of the biggest things that stood out to me was this:

“They are thinking about a seminal study from the University of Michigan that showed people can better learn after walking in the woods than after walking a busy street.

The study indicates that learning centers in the brain become taxed when asked to process information, even during the relatively passive experience of taking in an urban setting. By extension, some scientists believe heavy multitasking fatigues the brain, draining it of the ability to focus.”

I worry about this myself – especially when I’m feeling run down or overwhelmed with everything going on. There are blog posts to write, twitter and email to check, texts to send, calls to friends and family, writing and editing to be done, surfing to do, and movies to watch. And I don’t have kids to add on to that, with all the other things that entails. But some days I just want to stop and scream.

I worry that it affects my writing and creativity. And then I go back to my laptop and do exactly what I’ve been doing.

The scientists in the article didn’t come to any clear conclusions, though they did come up with a few new studies they want to conduct to look into this more. But the thing that stood out most to me was their realization that perhaps we’re all not as engaged with each other as we used to be.

As they near the airport, Mr. Kramer also mentions a personal discovery: “I have a colleague who says that I’m being very impolite when I pull out a computer during meetings. I say: ‘I can listen.’ ”
“Maybe I’m not listening so well. Maybe I can work at being more engaged.”

I know that when I’m distracted by something online I don’t pay as much attention as I should to other people. Perhaps even to my own writing. Heck, I had to buy a program to keep me off the Internet while I write! And I am seriously thinking about taking a tech break of my own – but I find myself strangely reluctant. How would I write without my laptop? Do research? Check email? I’m not sure if it will ever happen, but it’s an interesting thought.

How about you? Do you think a Tech break could benefit you and your relationships? Your creativity? Your productivity?