I hope what I’m about to admit doesn’t get my writer card taken away. Hold your breath…I’ve never read Alice in Wonderland or Through the Looking Glass. 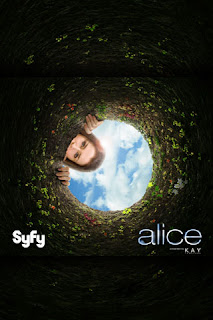 I know, I know. They’re classics, everybody’s read them. Unfortunately, the extent of my familiarity is watching the Disney version of the movie when I was 8. And more recently, the Johnny Depp/Tim Burton version (which I liked).

Well, last year, the SyFy channel (Formerly known as SciFi and not some horrible slang for a venereal disease) produced a modern re-imagining of the Alice story into a two night mini-series. The ads looked fantastic, so the other half and I hunkered down on the couch, gave the dog a huge bone to worry at so he’d leave us alone, and immediately got sucked in.

Now granted, I didn’t have a whole lot to compare it to, and the writer/director made it a point to use Alice in Wonderland only as a loose framework, but I loved it.  And even more surprising, so did the other half. It wasn’t overtly romantic or sappy, but the writer definitely knew how to use romantic tension to move the story along and ground some of the conflict. And oh the sexual tension there was!

An Obsession Begins
Well, fast forward to last week. My copy of the Blu-Ray version arrived from Amazon and I popped it in expecting to be pleasantly entertained for a couple of hours. I don’t know if I was feeling hormonal or what, but I was totally sucked in. Again. Even more than the first time.

Now I’m not sure if it’s because I’ve been brushing up on my plotting/pacing/characterization skills (cause the director/writer nailed all 3), or just because of the phenomenal acting, but this has become my new favorite movie!(embarrassed grin here –

In my defense, I’m using it as research. Really!  Most of what I write has romantic undertones, but is not pure romance. And that’s what Alice has done perfectly. Without too many spoilers, the sexual tension between characters is palpable, and you’re unsure if there’s going to be a happily ever after for them (or who it’ll be). 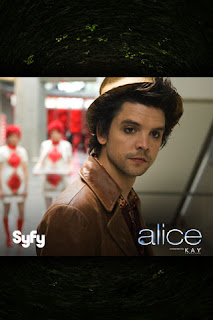 But that’s not the main focus of the story. At it’s heart, it’s about a girl searching for herself and her place in this world. Alice can’t have her HEA until she’s let go of her past, accepted herself, and moved on. And I’ve come to realized that’s one of the common themes in my work, which is perhaps why this movie struck me so much. (Well that, and Hatter is HOT! I think he’s totally going to become my “Edward” Bonus point – he’s only 3 years younger than me, not 13! No cradle robbing here

I’ve always been a book re-reader (don’t ask me how many times I’ve read Harry Potter), but I’ve never really had this happen with a movie, so I’m a little freaked out.

Do you guys have something you watch over and over and can’t seem to get enough of? If so, why? What draws you to it?